The solar system is a beautiful place filled with wonders that astronauts are only beginning to discover. Every year different spacecraft bring back fascinating images of different planets and their compositions. Saturn is one planet in the solar system that these scientists have explored and continue to explore.

It’s a beauty with a mystery, a huge frigid ball of gas, and a planet of violent storms that features a polar storm bigger than mainland United States. Essentially, it has some of the most powerful weathers in the solar system. The lightning here can be a million times powerful than those which occur on Earth. With that sneak peek, here are incredible and interesting facts about planet Saturn.

Fact 3. Saturn is the fifth brightest object in the solar system, which means it can easily be viewed with the naked eye through small telescopes and binoculars.

Fact 4. Saturn is ranked first in terms of flatness. This is because its polar diameter is 90% of its equatorial diameter, attributed to its low density and fast rotation.

Fact 5. Saturn and Jupiter have a lot in common regarding rotation and atmospheric condition, which is why Saturn was named after the father of the god of Jupiter (kings of the gods) in Roman mythology.

Fact 6. Most people recall Saturn by the nickname, the Ringed Planet. This nickname stems from the huge, eye-catching and extensive ring system that coils around it.

Fact 9. Only in 1655 did Dutch astronomer Christian Huygens look at Saturn through an advanced telescope and realize that the rings on each side of the Saturn were actually rings. 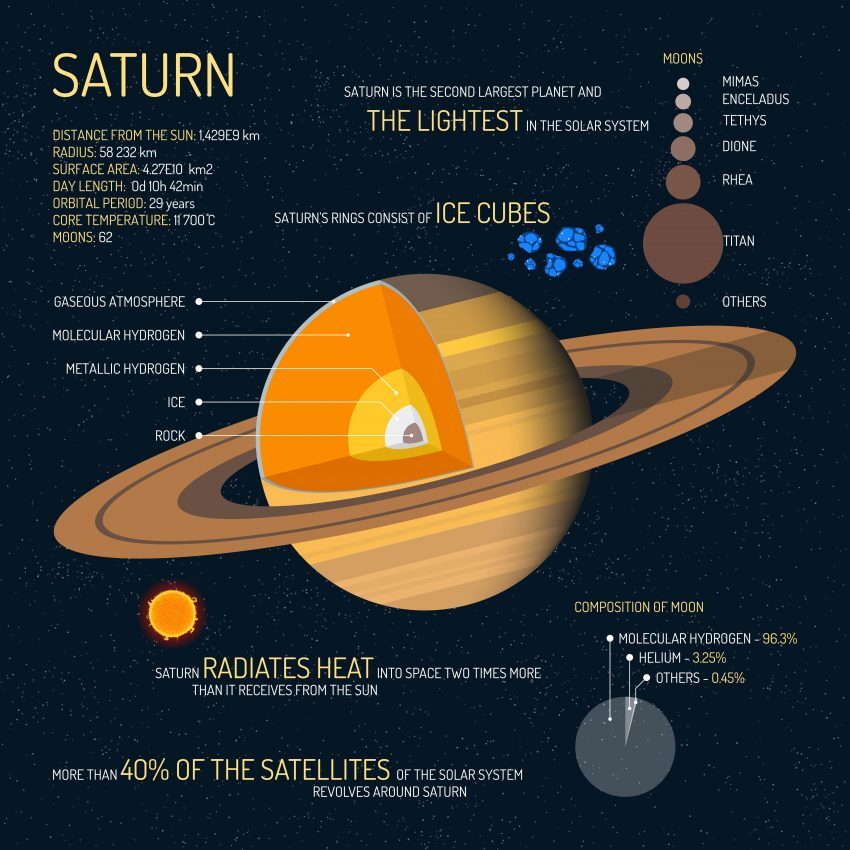 Fact 10. Saturn emits more energy than it absorbs from the sun. This is, indeed, a unique quality. Scientists speculate that this phenomenon is due to the generation of more energy from the gravitational complexion of the planet, in conjunction with the friction from vast quantity of helium occurring within its atmosphere.

Fact 12. Saturn’s upper atmosphere is divided into band of clouds. The top layer consists of ammonia ice. Below them are clouds of largely water ice. Going further below are layers of sulfur ice and cold hydrogen mixtures.

Fact 13. Saturn takes 29.4 Earth years to orbit the sun once. This sloth-like movement resulted in Saturn being nicknamed, Lubadsagushb (oldest of the old) by Ancient Assyrians.

Fact 14. Like Jupiter, Saturn is characterized by oval-shaped storms. The area around Saturn’s North Pole features hexagonal-shaped cloud patterns. Astronomers believe this might be a wave pattern occurring in upper clouds. There is also a vortex appearing over Jupiter’s South Pole that mimics a hurricane-like storm.

Fact 15. Of all the ringed planets, Saturn has the most extensive ring. Saturn’s rings, also called Saturnian rings, are mainly composed of ice chunks and small quantities of carbonaceous dust. The rings span as far as 120, 700 kilometres from planet Saturn. However, they are incredibly thin, approximately 20 meters thick.

Fact 16. Saturn has 150 moons and smaller moonlets. All Saturn’s moons are frozen worlds, the largest being Titan and Rhea. Enceladus looks like it has an ocean underneath its frozen surface.

Fact 17. As of this writing, 4 spacecraft have visited Saturn, including Pioneer 11, Cassini-Huygens, Voyager 1 and 2. Cassini is still orbiting Saturn today, and transmitting back a plethora of useful data about Saturn, including its rings and moons.

Fact 18. Titan, one of Saturn’s moons, is the second largest moon in the solar system, after Ganymede (Jupiter’s moon). Titan has a dense and complex atmosphere, consisting mainly of nitrogen. It also consists of water ice and rock.

Titan’s surface is frozen and contains liquid methane lakes, including a landscape, which is enveloped with frozen nitrogen. Scientists even speculate that Titan could harbor living species, but those species could not be similar to those living on planet Earth.

Fact 19. Saturn is not the only planet in the solar system that has rings. Jupiter, Uranus, and Neptune also have rings. However, they are not as visible and magnificent as Saturn’s.

Fact 21. The sun is a lot bigger than Saturn. About 1,600 Saturns could fit comfortably inside the Sun.

Fact 23. Storms occurring in Saturn are so powerful that they are able to last for many months or years. The Dragon Storm, a storm that lived the longest on Saturn in 2004 led to the creation of mega- lightening that was 1,000 times more powerful than any power lightening recorded on Earth.

Fact 24. Enceladus, one of Saturn’s moons, which was discovered by William Herschel in 1789 and named after the mythological giant, consists of Geysers that erupt organic compounds, water vapor, and ice particles. This moon is considered the shiniest object in the entire solar system since its icy surface reflects a greater percentage of the light it receives.

Fact 25. Typically, the sun determines weather patterns in most planets in the solar system. However, more than any other planet, the weather in Saturn is determined by conditions deep in the planet, instead of by the Sun. Saturn’s long distance from the sun and its internal heat generation are some of the reasons.

Fact 28. Scientist thought that Saturn rings developed during the age of dinosaurs. However, data solicited from Cassini probe shows something different; Saturn has featured its rings throughout history. 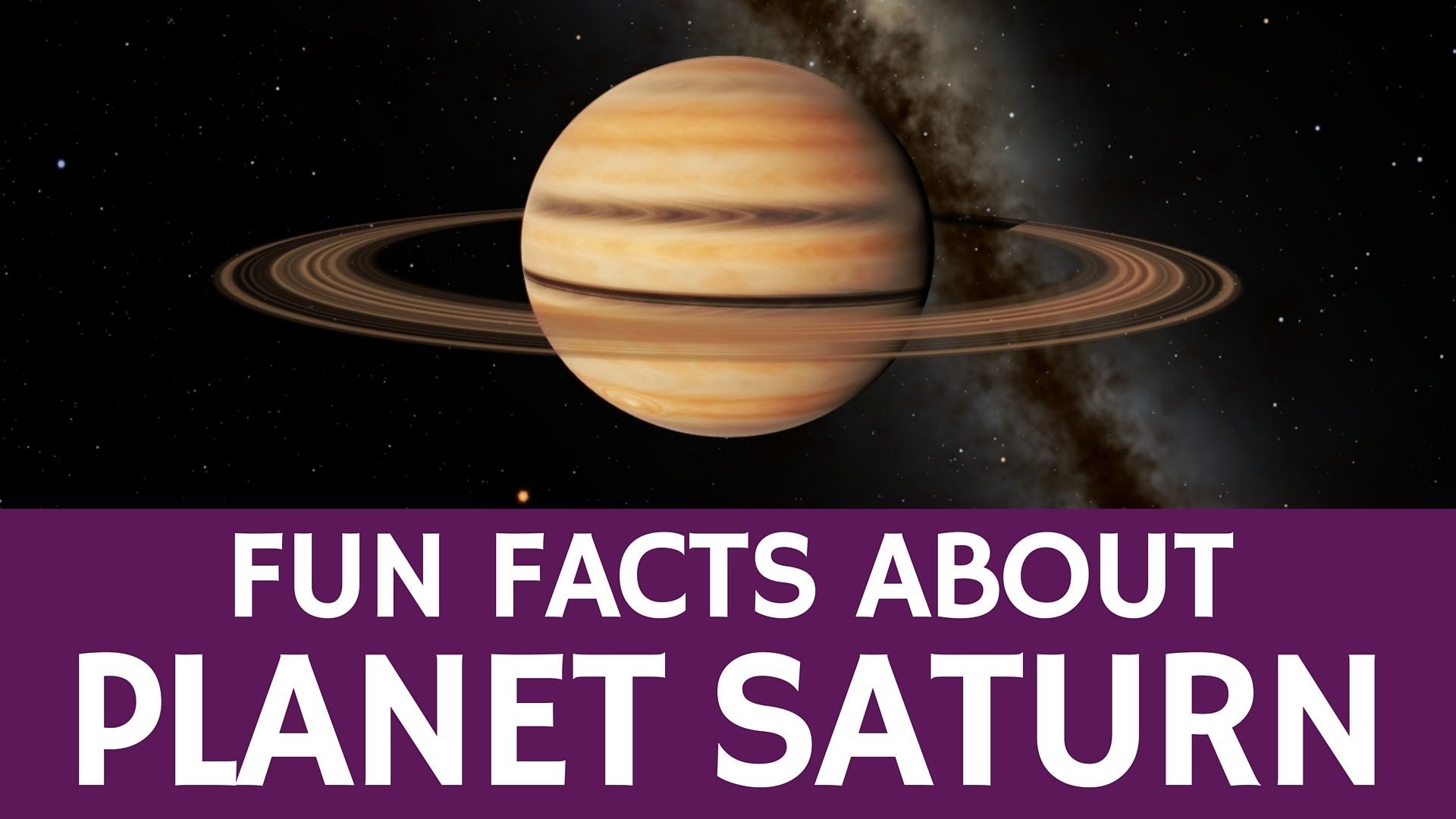 Fact 30. Astronomers believe that the spectacular Saturn’s rings might vanish in the next 50 years. They say that the rings will be absorbed into the planet due to Saturn’s powerful gravitational pool or the rings will simply dissolve into space.

Fact 31. Saturn rings tend to disappear after every 14 years. This disappearance is as a result of Saturn being tilted directly to come in line with Earth.

Fact 33. Because Saturn is the slowest moving planet, the word, saturnine, which means sluggish, sullen or gloomy, was derived from it.