Rome is a city filled with wonder. Everywhere you walk you see incredible historic monuments, churches, fountains and intriguing landmarks. It’s somewhere to explore with your eyes and ears wide open.

While most of us learned about Ancient Rome at school, it’s a whole other experience to walk the streets of the modern city. I loved seeing the Colosseum up close, passing the Roman Forum, then venturing into the Vatican and seeing St Peter’s in all its glory. It brought the tales of the Roman Empire to life!

The exact date of the foundation of Rome is not accurate.

Here’s the generally accepted story: Remus and Romulus were abandoned by their parents, and rescued by a female wolf. The she-wolf suckled the two boys until they grew up.

As adults, Remus and Romulus wanted to found a new city, but couldn’t agree on the name, nor on the location. A fight ensued, and Romulus killed his brother.

In 753 BC, Romulus founded Rome on the Palatine Hill. 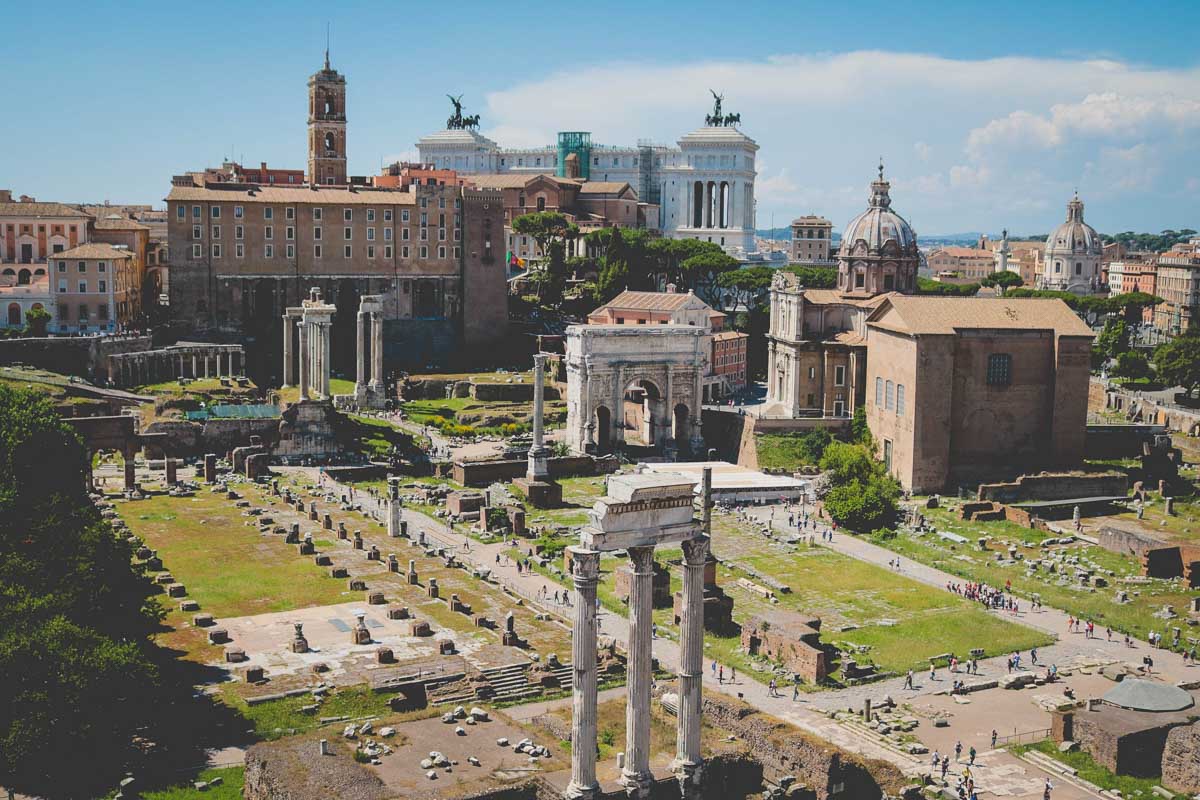 The Roman Forum in Rome

2. Rome is the most visited city in Italy

In 2019, more than 9 million tourists visited Rome, making it the most visited city in Italy before Milan and Venice.

The united country of Italy that we know today hasn’t always been this way.

In fact, it was divided for a very long period of time in history, with several different independent kingdoms all over this part of Europe.

It’s only on 17 March 1861 that the Kingdom of Italy was created, forming modern Italy. 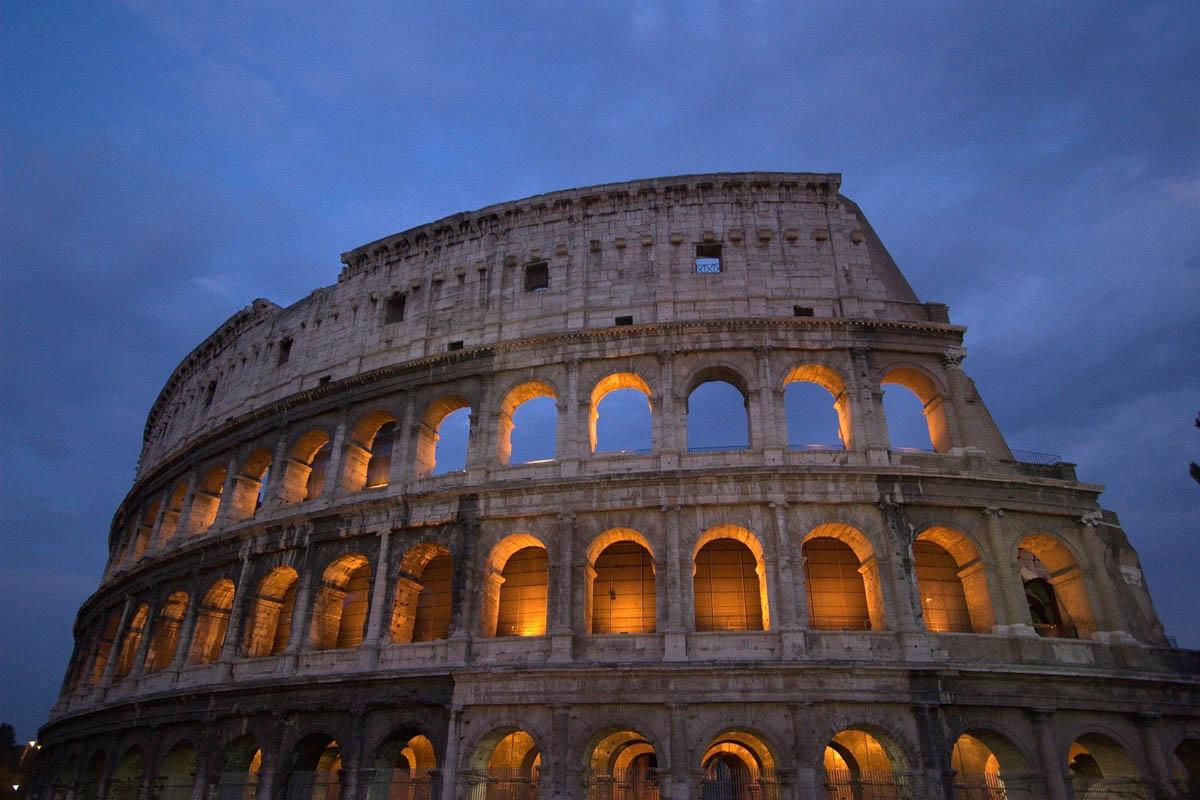 As surprising as it might seem, Rome wasn’t always capital of Italy.

And finally, Rome became the capital of Italy in January 1871.

5. The nickname of Rome is Caput Mundi, Italian for Capital of the World

It’s first known as The Eternal City, or Urbs Aeterna. This nickname was first used by poet Tibullus in the 1st century BC. It was then picked up by 2 other poets later on, Virgil and Ovid.

But the city is also known as Caput Mundi, Capital of the World. This nickname came from the central position of Rome in ancient times, when it dominated most of the known world.

Wait, how many?! Yes you read that right, there are over 2 thousand fountains in Rome.

Most of the fountains are small fountains, known as nasone, Italian for big nose, providing free drinking water to all Romans.

But there are also some pretty impressive fountains, way bigger than the nasoni, built in ancient times. The most famous are the Trevi Fountain and the Fontana della Barcaccia. 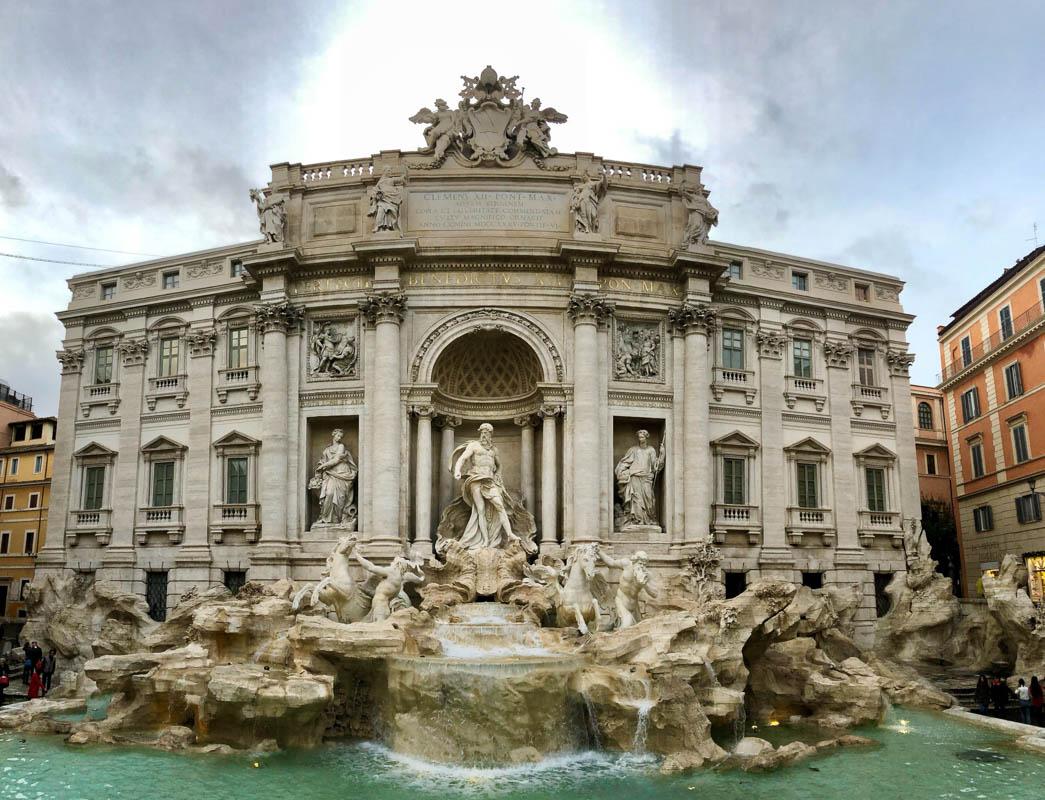 7. More than 1.3 million euros is tossed every year in the Trevi Fountain

Legend has it that if you throw a coin in the Trevi Fountain, you’ll return to Rome. And if you throw 2 more coins, you’ll find love. It’s definitely a bucket list thing to do when in Rome.

As a result, millions of tourists flock to the fountain each year to toss coins in there. An estimated 1.3 million euros is tossed every year in the fountain, or 3,561€ per day.

The money is gathered every night by government workers, and donated to Caritas, a nonprofit organization.

8. Rome was the first city in the world to reach 1 million inhabitants

This is a pretty interesting fact about Rome, that shows just how Rome was the center of the known world in ancient times.

At its peak, the Roman Empire in its entirety had around 90 million people. 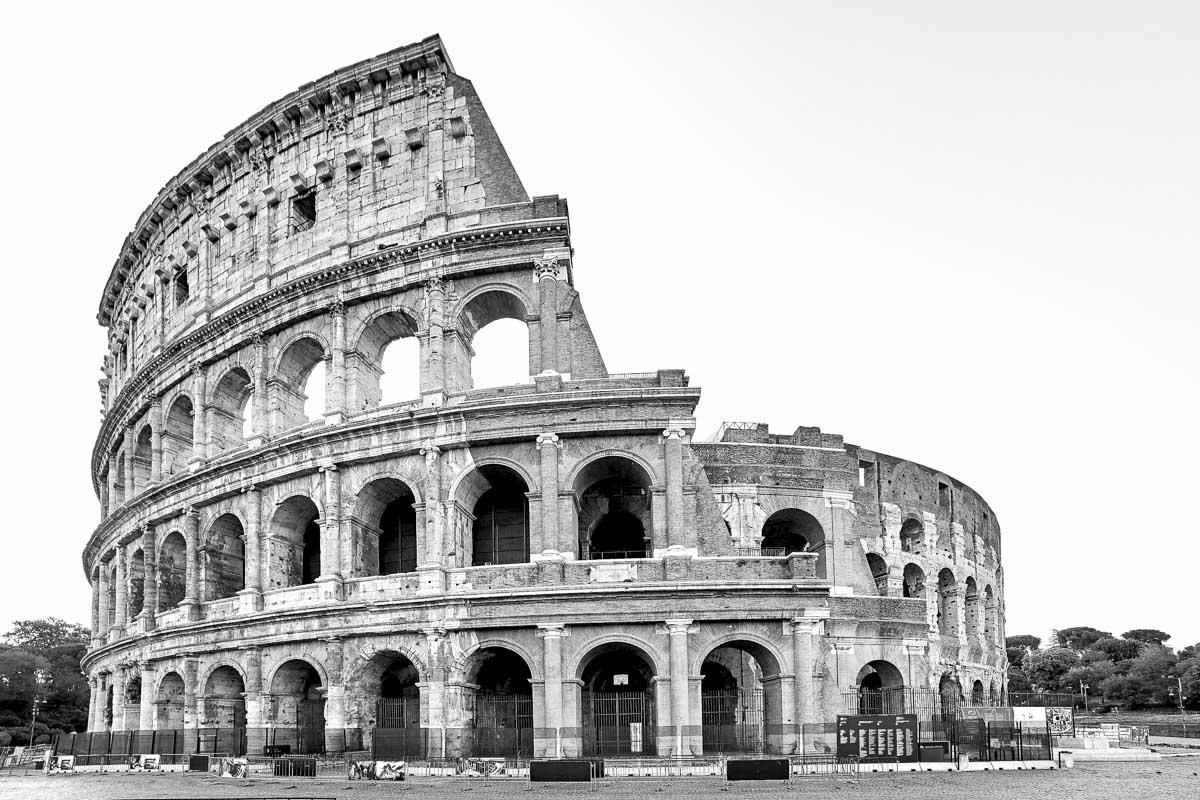 9. Rome is the most populated city in Italy

Today Rome is no longer the most populated city in the world.

In fact, it only ranks 89th on the list.

Can you imagine?! This is definitely one of the crazy facts about Rome history.

With a population around 1 million, and the city contained in the Aurelian Walls within 13.7 km², population density in Ancient Rome was 73,000 people per km² (189,000 per square mile). 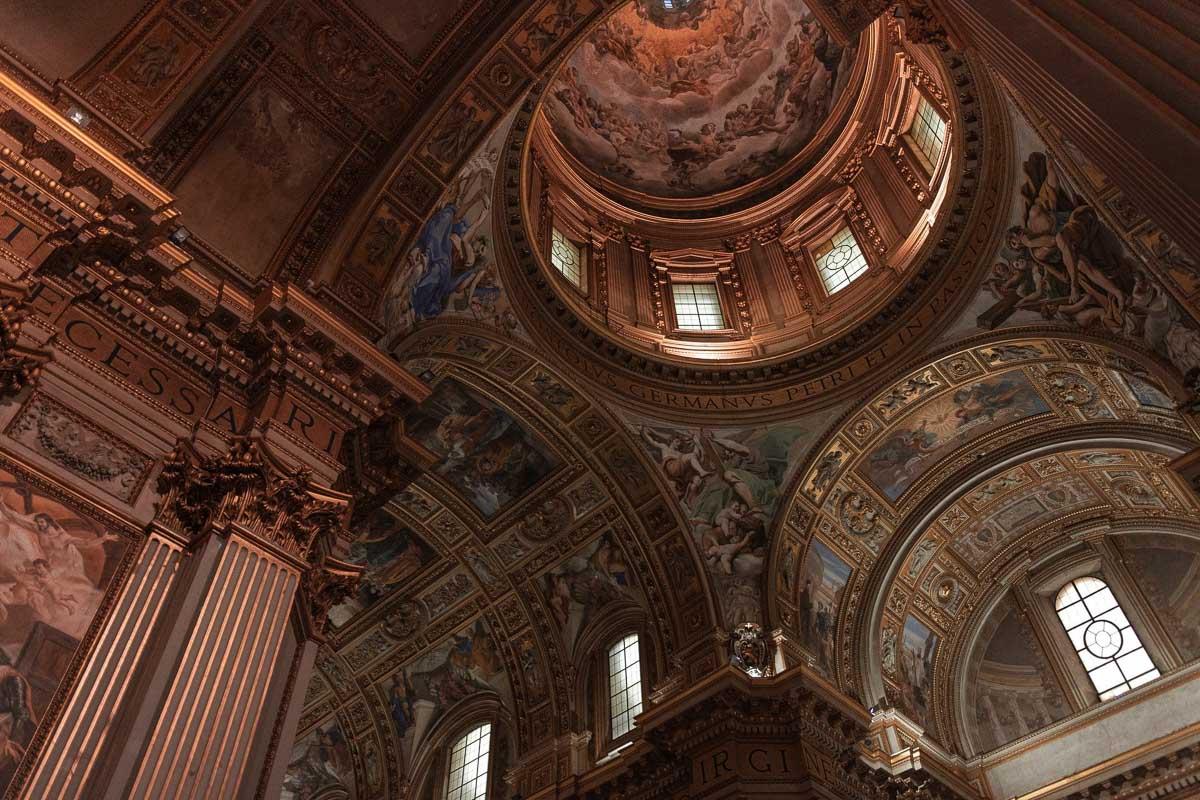 11. Rome is the city with the most Christian churches in the world

There are more than 900 churches in Rome, with most of them being Christian churches.

If you add into the mix the chapels located in private residences, convents or palaces, the number goes up to 1,600!

The very first shopping mall in the world was built in Ancient Rome, in 110 AD.

It was named Trajan’s Market, and built by Greek engineer Apollodorus of Damascus under orders of Roman Emperor Trajan.

The Trajan’s Market was a giant covered place with 2 floors and more than 150 rooms. Most of them were shops, but there were also restaurants and libraries! 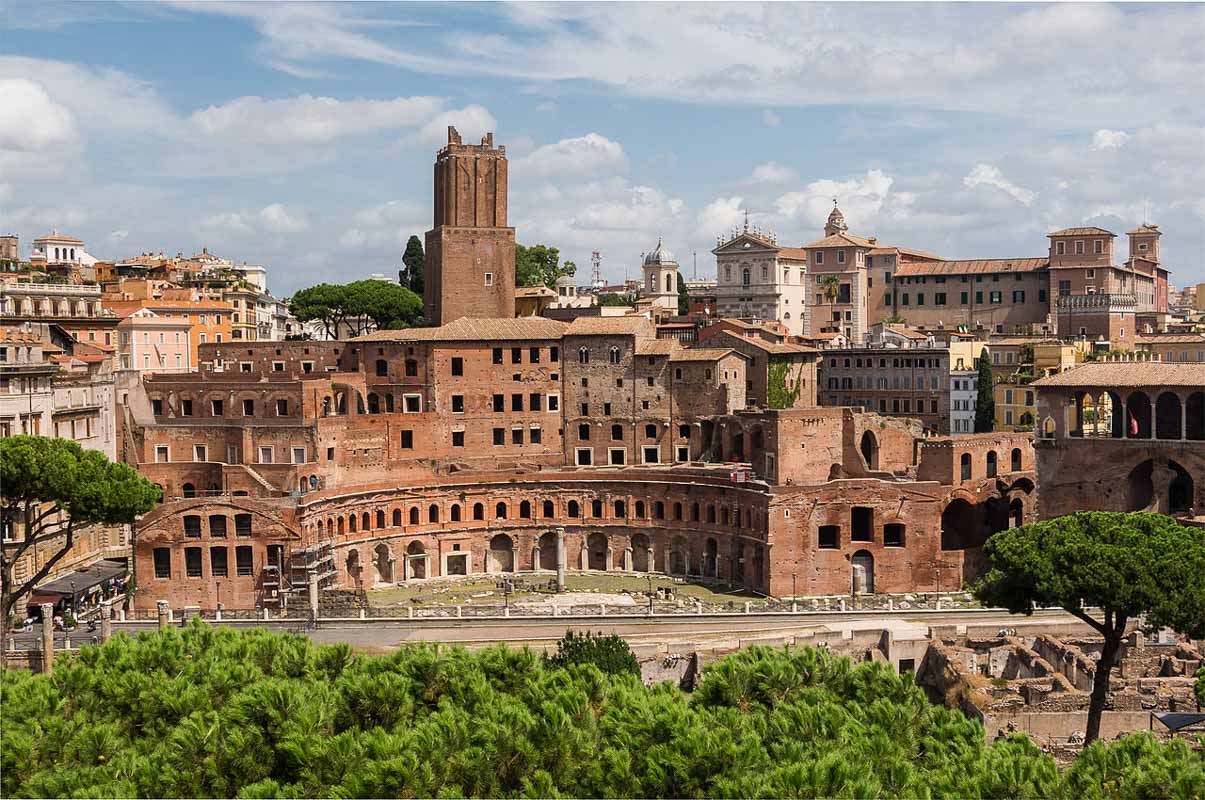 Remains of the Trajan’s market in Rome

13. La Sapienza University in Rome is one of the largest universities in Europe

La Sapienza University is the biggest university in Rome, and one of the most prestigious. It’s also known as the University of Rome, and taught many Nobel prize winners, famous scientists and politicians.

It’s also one of the oldest universities still in operation, and was founded in 1303 under the Papal States.

Let’s go back in time even more with this next one on the list of interesting facts of Rome.

The Pantheon is one of the main landmarks in Rome, and definitely a must-see in the city. It’s a massive Roman temple, built in 125 AD by Consul Marcus Agrippa under the reign of Emperor Augustus. The original building was destroyed during a massive fire in 80 AD, and rebuilt later by Emperor Adrian.

Today the Pantheon is a Catholic church and is still in use, 2,000 years later. 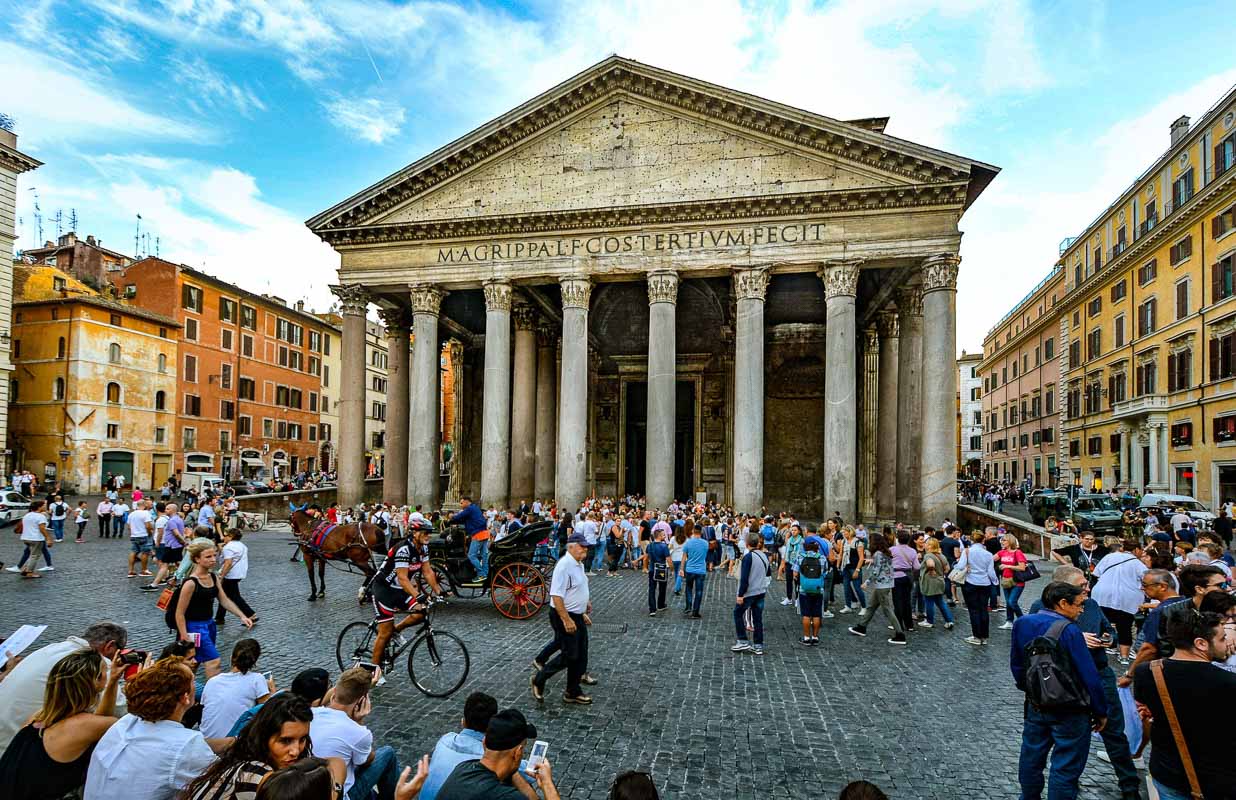 The Pantheon in Rome, Italy

15. Vatican City is located inside Rome

Vatican city is the smallest independent state in the world, ruled by the pope.

It’s located entirely inside the city of Rome, and you can just simply walk in the street in Rome and end up in Vatican. 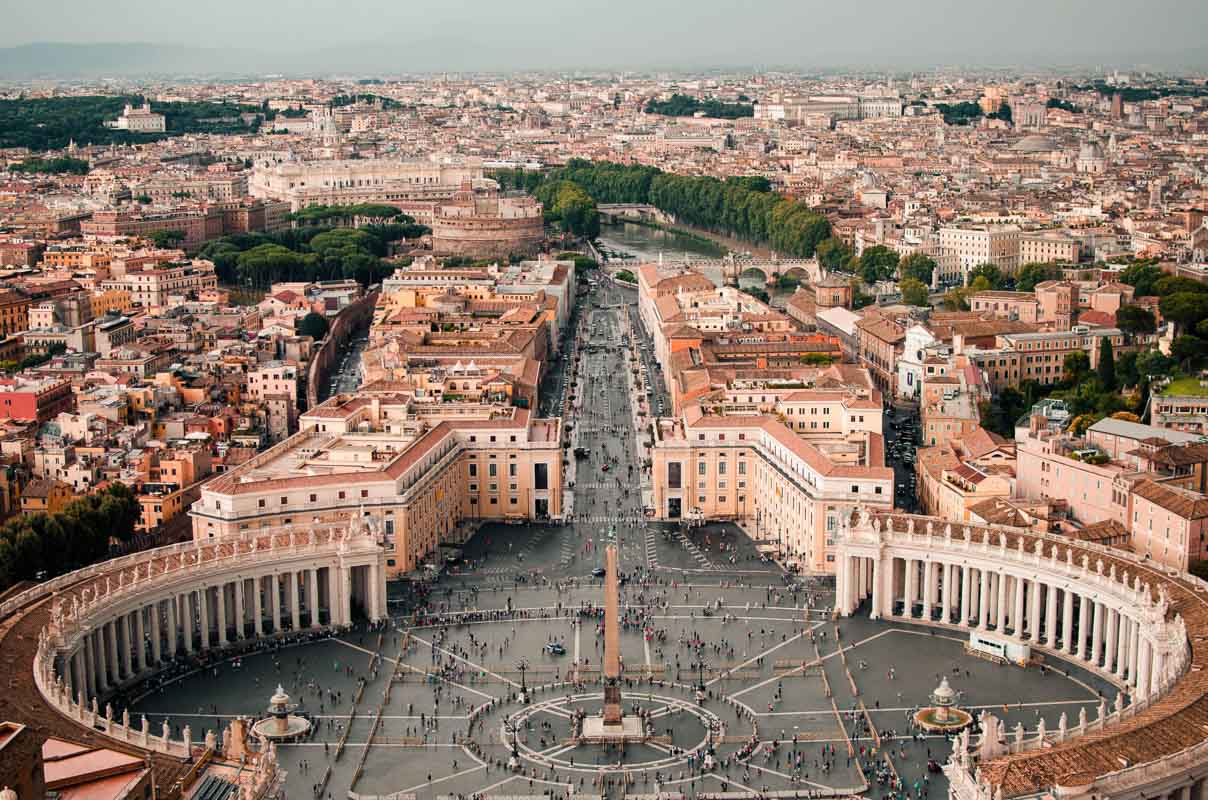 View over Vatican city; at the end of the street, it’s Rome

16. St Peter’s basilica in Vatican City is the biggest church in the world

The most famous landmark in Vatican City is probably Saint Peter’s Basilica, or the Papal Basilica of Saint Peter in the Vatican.

It brings catholics from all over the world, to attend the pope’s liturgies: from 15.000 to 80.000 people per liturgy!

The basilica is also the biggest in the world, in both interior area and capacity. 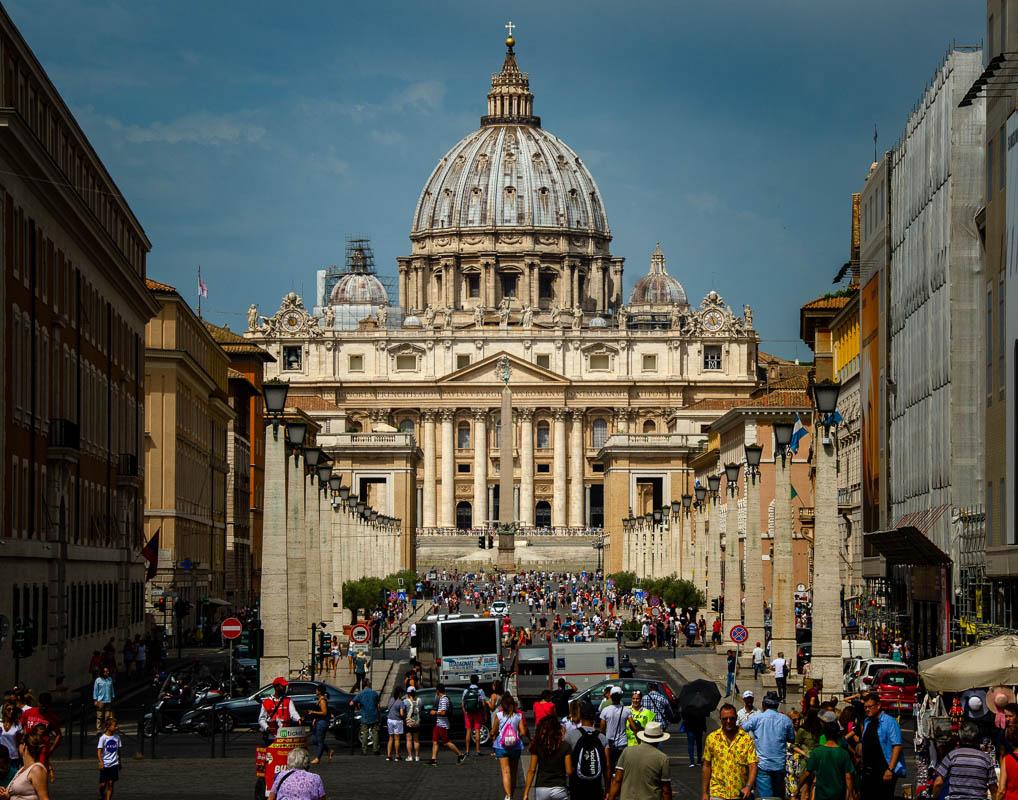 17. There is a secret passage from Vatican to Castel Sant’Angelo

This is one of the lesser known facts about Rome in Italy; the secret passage to escape Vatican.

The Passetto del Borgo is a secret corridor that leads from Vatican City to the nearby Castel Sant’Angelo.

It was used during the siege of Rome in 1527, when Pope Clement VII escaped when the army of Charles V killed almost all of the Swiss Guard; he then stayed in the castle for six months. 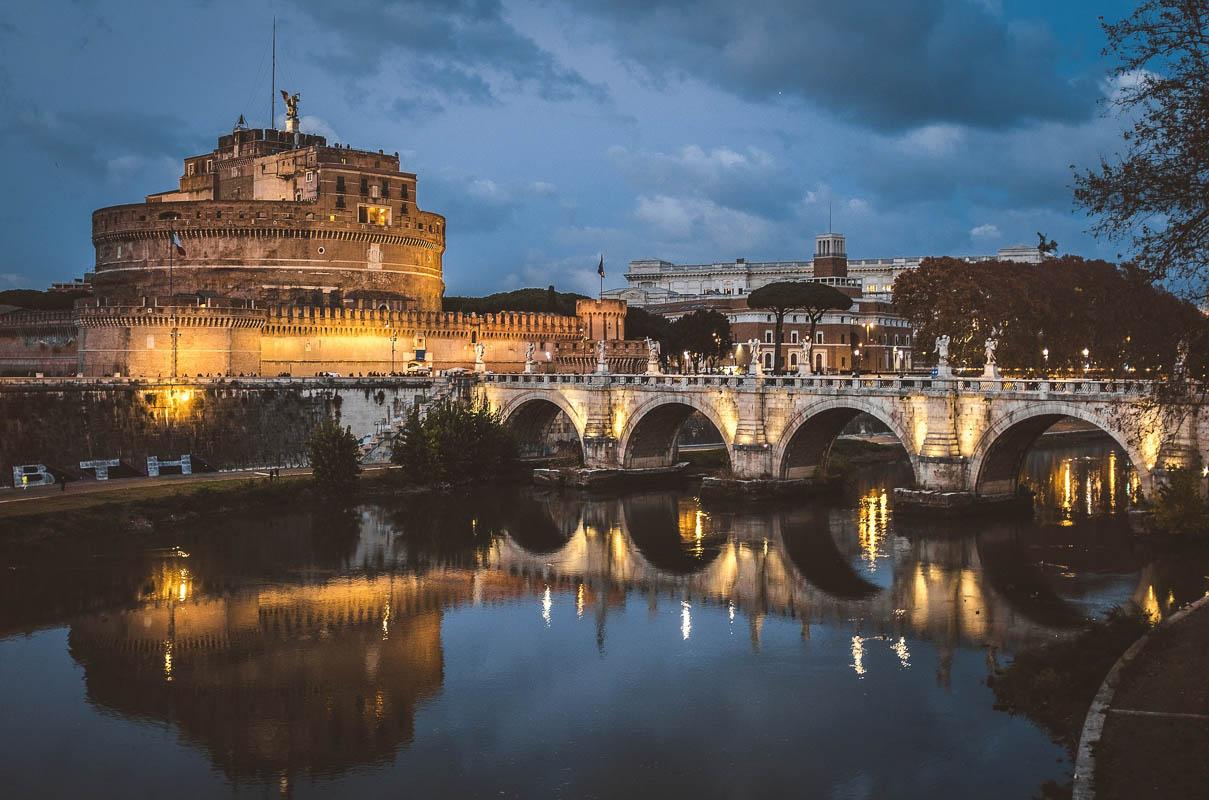 The Castel Sant’Angelo in Rome

18. SPQR is the symbol of the city

In Rome, the symbol SPQR is all over the city: on the coat of arms of Rome, the ancient monuments, manhole covers, and official buildings for example.

But what does it mean?

SPQR stands for Senātus Populusque Rōmānus; latin phrase meaning “The Senate and Roman People”. It refers to the double sovereignty of the Senate and the Roman citizens over the city and the whole empire.

The Colosseum is the most famous landmark in Rome.

It’s a massive amphitheater, built by the Romans in 80 AD. The Colosseum could hold up to 50,000 to 80,000 spectators, which is pretty impressive for something built literally 2,000 years ago. 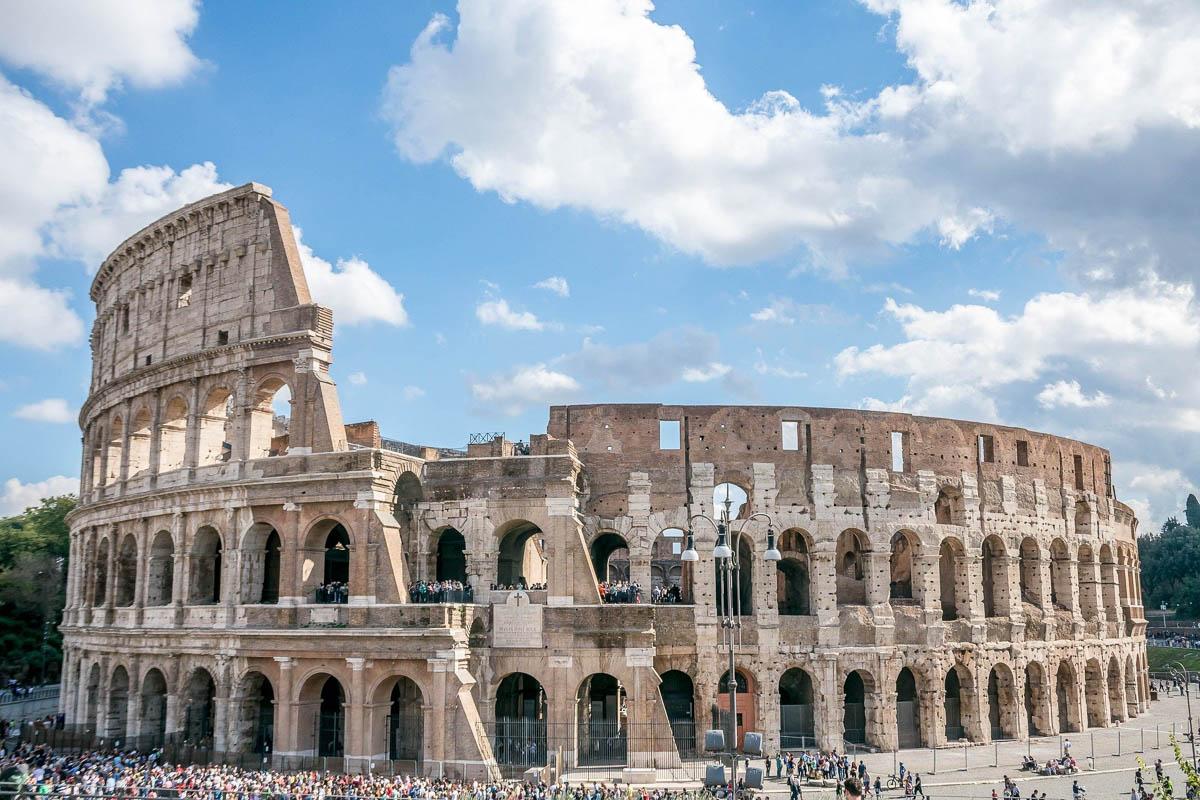 Gladiator fights were one of the main events hosted in the Colosseum.

The fighters were most often slaves, and they fought against each other in massive fights to entertain the crowds.

At the beginning, these fights were fight to death: gladiators who lost the battle or got injured were sentenced to die on the field. In later years, this rule changed and very few gladiator died (only 19 died under Caesar).

21. The Colosseum was sometimes completely flooded to host naval battles

When the Colosseum first opened in 80 AD, it hosted a naumachia: a naval battle.

The amphitheater was flooded, and gladiators fought in ships and in water. These events were pretty popular, and hosted several times in the amphitheater, but also outside in lakes.

22. Over 500,000 gladiators and 1 million animals were killed during the Colosseum fights

Animals were often used in the Colosseum and in gladiator fights in general.

They were either used in executions ad bestias, where a prisoner was sent to die in the arena with wild animals, or in fights against gladiators.

For the inauguration of the Colosseum in 81 AD, the games lasted 100 days. During the games, more than 9,000 wild animals were killed, including wolves, snakes, hyenas, giraffes, lions and tigers among others.

The Romans killed so many animals during the shows, that some species even became extinct. 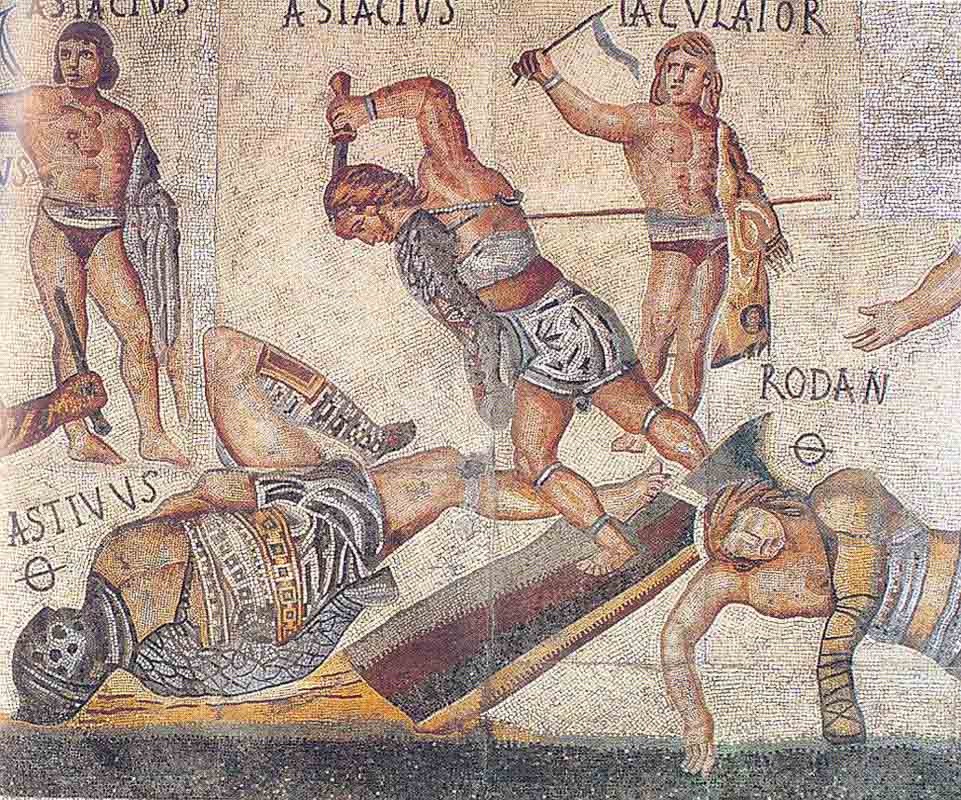 The Colosseum was built after the reign of Roman Emperor Nero, and started by Emperor Vespasian in 72 AD.

Construction took several years, and finished in 80 AD under Vespasian’s son, Titus. Vespasian and Titus were members of the Flavian Dynasty, and as such, the amphitheater was first known as the Flavian Amphitheater.

The name Colosseum only came later; near the entrance was a colossal statue of previous emperor Nero. As years went by, the Romans started to refer more and more to the amphitheater as “Colosseum”, after the Colossus statue. 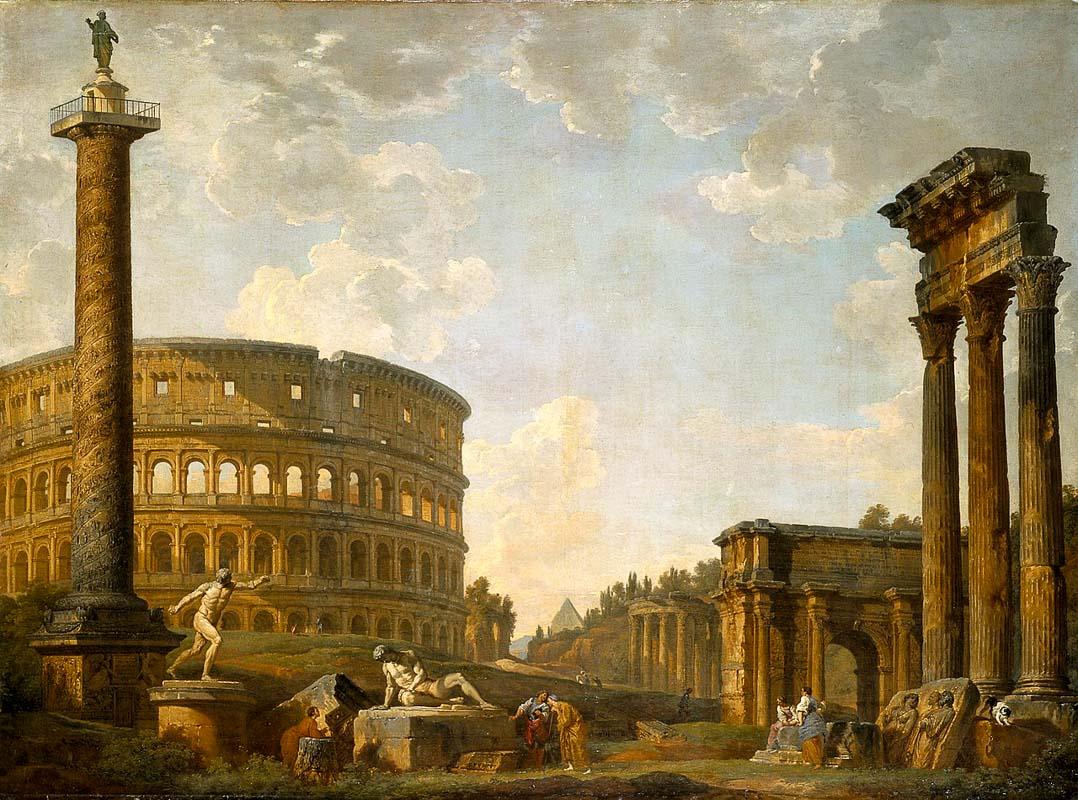 The city of Rome was built on 7 hills, also known as the 7 hills of Rome:

Palatine Hill was, according to the founding legend of Rome, the original hill on which Rome was founded.

25. The word palace comes from the Palatine Hill in Rome

As we saw above, the Palatine Hill is one of the 7 hills in Rome, and the foundation of the ancient city.

The word “palatium” in Latin was used to describe the place of power, as the residences of the emperors were set on the Palatine hill.

It later evolved to “palace” in English (and similarly in other languages), and thus the word palace comes from the Palatine hill. 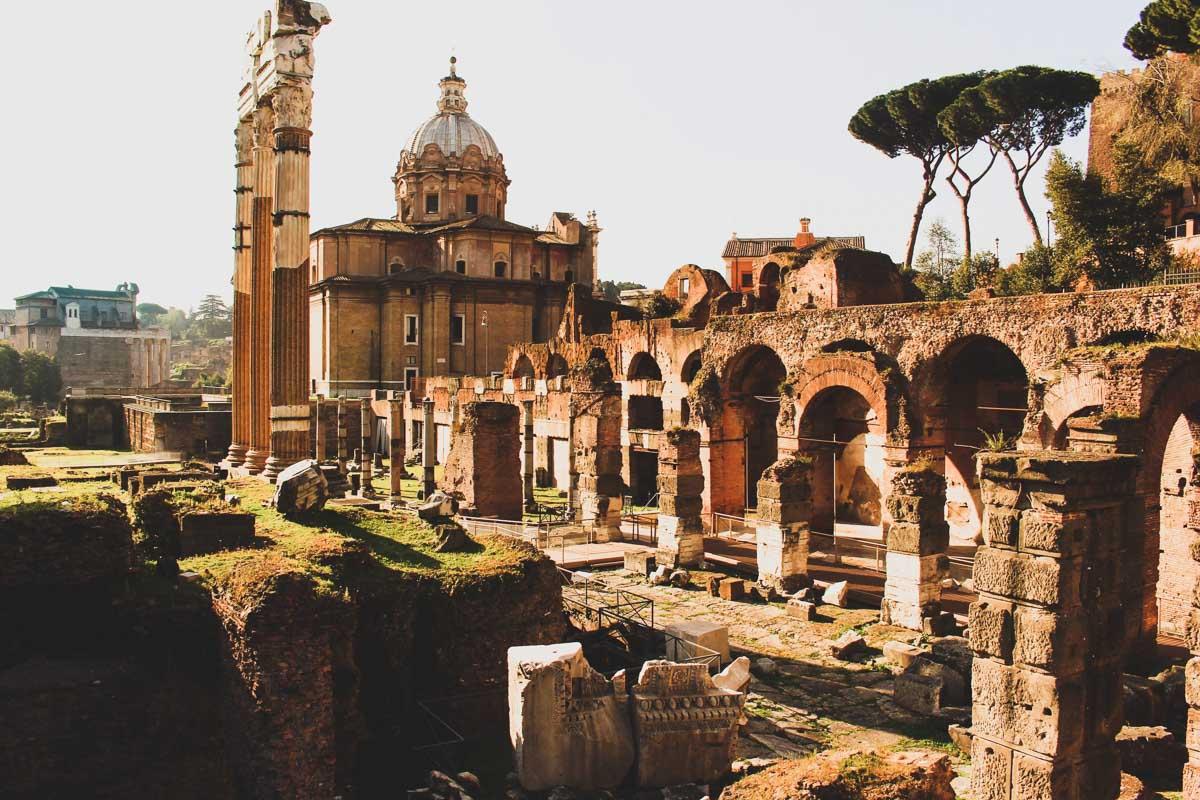 The Roman Forum near Palatine Hill