The Lion (Panthera leo) is the second largest cat in the world, following the Tiger. It is a species in the cat family ‘Felidae’, which includes Tigers, Leopards and Jaguars.

They inhabit the grasslands and savannahs in Sub-Saharan Africa.

The lion is visibly different from most other cats in that they have a muscular, deep chest with a short but rounded head. The neck is reduced and they have rounded ears plus a hairy tuft at the end of their tails. The male is easy to distinguish from the female, as they have a prominent mane.

Lions are diurnal, which means they typically hunt during the day, but they can adapt and hunt at night if necessary.

The lion has few predators, although man is reducing the habitat they require on a regular basis, which has put the lion on the vulnerable list of the IUCN. This means that their natural habitat is shrinking along with their numbers. They are slowly moving into the territory identified as endangered.

The African lion is actually the most social of all big cats on the planet. A pride can include up to 30 animals, but typically are made up of 10-15, with five or six females, their cubs (both male and female) and two males who breed with the females in the group.

2. Young male lions get kicked out of the pride by older males when they reach sexual maturity, at about 2 years old.

These young males then live and roam in small groups (often with brothers and cousins), until they find another pride that they could take over and breed with females. This will often lead to fights with existing males in the pride.

3. When a male lion takes over a pride, it can kill all the lion cubs to bring the pride’s females into heat again.

This allows the new males to breed and raise their own offspring. 2

4. A male lions mane is a symbol of their fighting ability and health to both potential mates, and rivals.

Experiments showed that darker and longer manes are attracted more females, and male lions were more likely to attack blonder, and shorter manes. 3 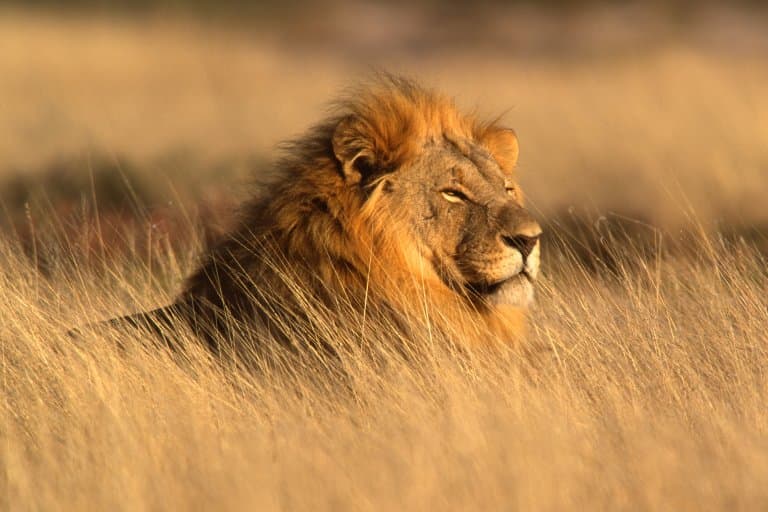 5. Lionesses can turn on and kill older previously dominant males in a pride.

Male lions become a member of the pride because the females accept them as the pride male. Therefore, their social status can can be precarious. The lion has to win the grace of the females and usually will only be able to remain the pride male 3 to 5 years in the wild. 4

The roar of a lion can be heard as far away as 5 miles from the source. 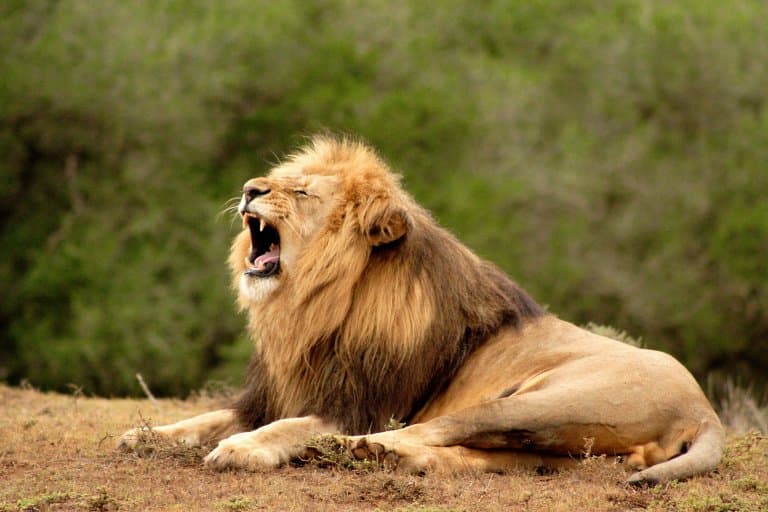 While not quite as rapid as the Cheetah which can reach speeds of 70mph, a lion can achieve a land speed of 50 Mph for short distances.

8. They have an amazing jump, and have been recorded springing as far as 36 feet.

They can also climb extemely well, capable of climbing vertical trunks of trees with ease.

9. There is also a very rare white lion.

It is not a different sub-species or albino, the white is due to a genetic condition called leucism, which causes a partial loss of pigmentation. 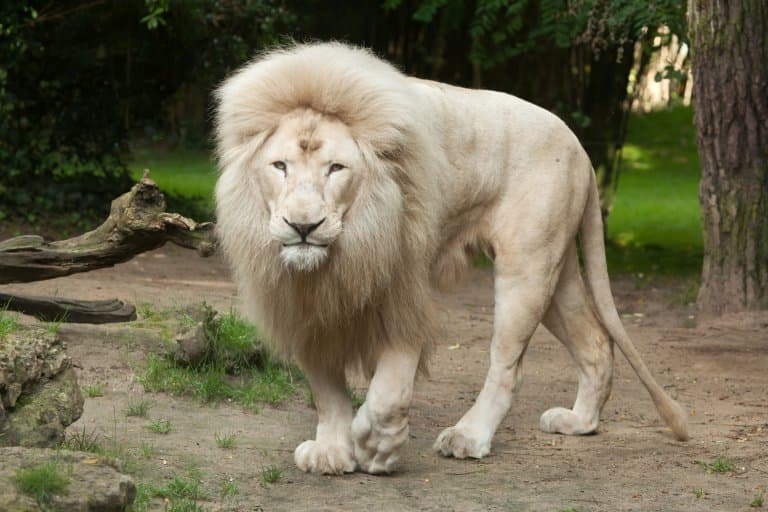 10. Lions can live twice as long in captivity.

11. The lion diet is primarily meat.

African lions hunt and consume large animals they find in the grasslands they inhabit. These animals include zebras, wildebeest and antelopes. The male lion requires 7-kilograms of food daily and the female can survive on 5-kilos.

12. Lionesses do much of the hunting.

The majority of the hunting in a group of lions is handled by the females. They will actually use intelligent hunting tactics and work as a group to trap and capture prey they would otherwise not be able to get while hunting on their own. They also use this ‘team approach’ to other activities within the pride. 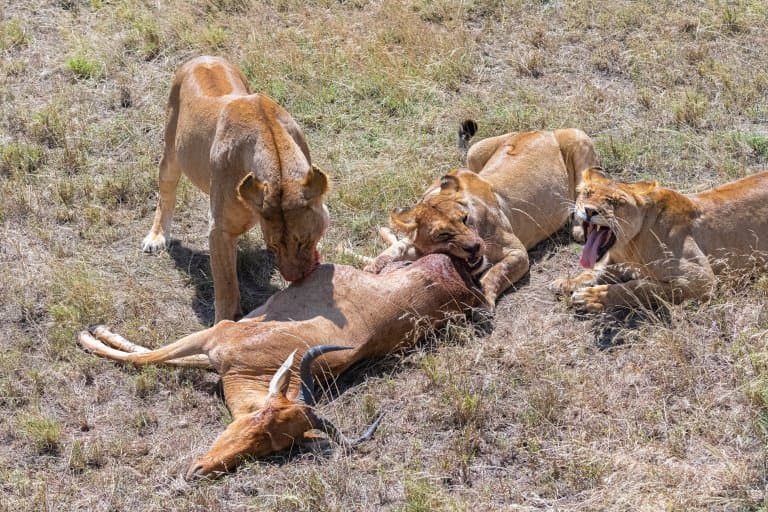 13. Lions are pretty good at chilling out.

Actually, the average lion will spend between 16 and 20 hours a day just resting or sleeping. It’s because they do not have many sweat glands so in order to conserve energy, lions will just lie about and watch the world unfold around them. They are more active at night when it is cooler although they do conduct most of their hunting activity during the day.

14. They have amazing vision.

The eyes of the lion are six times more sensitive to light than the eyes of a human. This means their night vision is far better than that of some of their prey.

15. Lions mate early in their lives.

The age is the same for both male and female. Either is ready to mate when they reach the age of 3 to 4 years.

16. There is a rather short gestation period for lions.

It takes about four months before a young lion is born.

17. The birth process is kept secret.

For some reason, the pregnant lioness will give birth to a cub away from the rest of the pride. Then she will proceed to hide the young from everyone else for the following six weeks.

A newborn will weigh not much more than 3-pounds at birth and will be completely dependent on its mother for the first several months of its life. 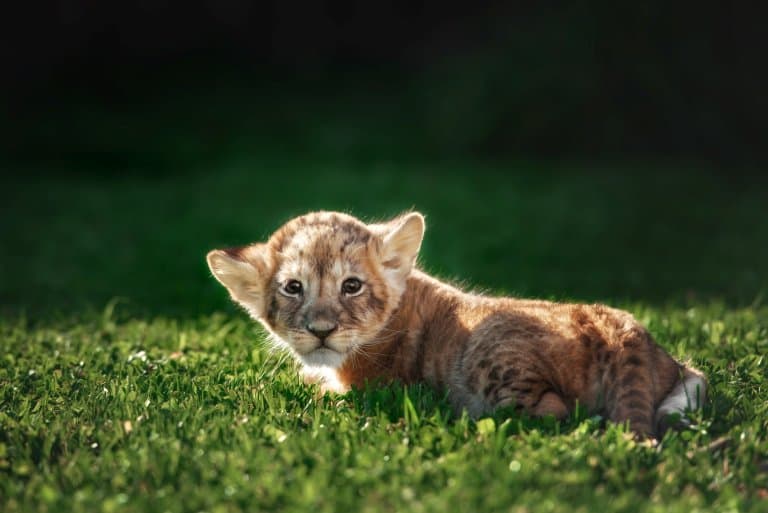 Not only are they caring towards their own young, if a cub is neglected in any way, a lioness will allow it to suckle in an effort to help the cub survive.

20. Cubs are raised together in a pride.

The females in a group of lions typically give birth at about the same time. This allows for the cubs to play and grow up together with support from the entire pride.

The female cubs will stay with the pride as they grow older. At the age of two they will be hunters for the pride. At that same age, the males are pushed out of the pride.

22. You can tell the age of male lions by the colour of their mane.

The mane of the male lion gets darker as it ages so the darker mane of a lion in a pride denotes the oldest of the group. 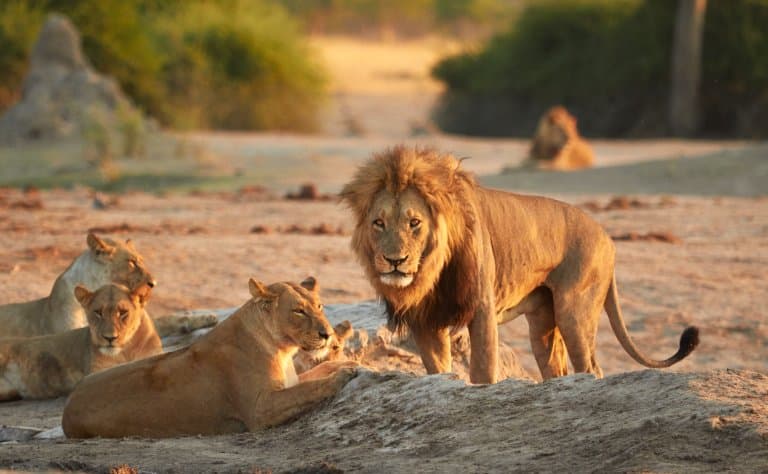 23. Lions walk in an unusual manner.

Their heels do not touch the ground when a lion walks. This is because they have big toes and pads on the bottom of their feet, which allow them to move quietly.

24. The lion population has dropped considerably in the past few decades.

25. Lions are symbolic in various cultures.

The lion generally stands for strength and courage and as such, are usually symbols commonly used in association with royalty. It is probably because of this that the phrase “King of the Jungle” came into being.

26. Lions have a very, very long history on the planet.

Ancient Egyptians held lions in high esteem as their war deities because of the power, strength and fierceness lions possess. The sphinxes in Egypt are a fine example of the age old depiction of lions in Egyptian culture. The lion head also appears in many pieces of art from ancient times as well in pieces of jewelry.