Khyber Pakhtunkhwa (often abbreviated KPK), formerly known as North-West Frontier Province, is one of the four administrative provinces of Pakistan, located in the northwestern region of the country along the international border with Afghanistan. It was previously known as the North-West Frontier Province until 2010 when the name was changed to Khyber Pakhtunkhwa by the 18th Amendment to Pakistan’s Constitution.

Khyber Pakhtunkhwa is the third-largest province of Pakistan by the size of both population and economy, though it is geographically the smallest of four. The province is the site of the ancient kingdom Gandhara, including the ruins of its capital Pushkalavati near modern-day Charsadda. Originally a stronghold of Buddhism, the history of the region was made up of frequent invasions under various Empires due to its geographical closes to the Khyber Pass.

Since the 9/11 attacks in the United States in 2001, the Khyber Pakhtunkhwa has been a major theatre of militancy and terrorism which intensified when the Taliban began an unsuccessful attempt to seize the control of the province in 2004. As of July 2014, about 929,859 people were reported to be internally displaced from North Waziristan to Khyber Pakhtunkhwa as a result of Operation Zarb-e-Azb. 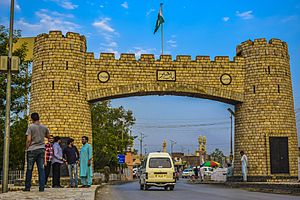 During the times of Indus Valley Civilization the modern Khyber Pakhtunkhwa’s Khyber Pass, through Hindu Kush provided a route to other neighbouring regions and was used by merchants on trade excursions. From 1500 BCE, Indo-Aryan peoples started to enter in the region of modern-day Iran, Pakistan, Afghanistan and North India after having passed Khyber Pass.

The modern day capital city of Peshawar was originally known in ancient times as Purushapura when the region was Hindu. The area was once known to be a great center of learning.

Hindko and Pashto folk music are popular in Pakhtunkhwa and have a rich tradition going back hundreds of years. The main instruments are the rubab, mangey and harmonium. Khowar folk music is popular in Chitral and northern Swat. The tunes of Khowar music are very different from those of Pashto, and the main instrument is the Chitrali sitar. A form of band music composed of clarinets (surnai) and drums is popular in Chitral. It is played at polo matches and dances. The same form of band music is played in the neighbouring Northern Areas. 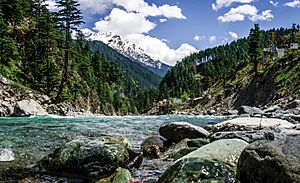 Khyber Pakhtunkhwa sits primarily on the Iranian plateau and cis part of the junction where the slopes of the Hindu Kush mountains on the Eurasian plate give way to the Indus-watered hills approaching South Asia. This situation has led to seismic activity in the past. The famous Khyber Pass links the province to Afghanistan, while the Kohalla Bridge in Circle Bakote Abbottabad is a major crossing point over the Jhelum River in the east.

The Sheikh Badin Hills, sandstone hills that stretch east from the Sulaiman Mountains to the Indus River, separates Dera Ismail Khan District from the plains of the Lakki Marwat. The highest peak in the range is the limestone Sheikh Badin Mountain, which is protected by the Sheikh Badin National Park. 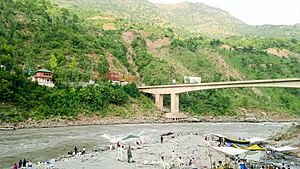 Kohala bridge, the bridge between Punjab and Kashmir

Near the Indus River of the Sheikh Badin Hills are limestone hills known as the Kafir Kot hills, where the ancient Hindu complex of Kafir Kot is located.

Geographically the province could be divided into two zones: the northern one extending from the ranges of the Hindu Kush to the borders of Peshawar basin and the southern one extending from Peshawar to the Derajat basin. The northern zone is cold and snowy in winters with heavy rainfall and pleasant summers. The southern zone is arid with hot summers and cold winters. The snow-capped peaks and lush green valleys of unusual beauty have enormous potential for tourism, there are about 29 National Parks in Pakistan and about 18 in Khyber Pakhtunkhwa. 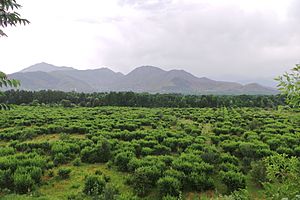 Agriculture remains important and the main cash crops include wheat, maize, tobacco, rice, sugar beets, as well as fruits are grown in the province. Workshops throughout the province support the manufacture of small arms and weapons. The province accounts for at least 78% of the marble production in Pakistan.

Some manufacturing and high tech investments in Peshawar has helped improve job prospects for many locals, while trade in the province involves nearly every product. The bazaars in the province are renowned throughout Pakistan. Unemployment has been reduced due to establishment of industrial zones.