1. The Jinn are beings that Allah created before Mankind out of fire.

And the Jinn, We created aforetime from the smokeless flame of fire. (Qur’an, 15:27)

2. The Jinn possess free-will, some are believers and others disbelivers (like Satan).

And some of us (Jinn) are Muslims, and some of us are disbelievers (who have deviated from the right path). And whosoever has embraced Islam, then such have sought the Right Path. (Qur’an, 72:14)

“There are three types of Jinn: one type that fly about through the air all the time, another type that appear as snakes and dogs and an earthbound type which resides in one place or wanders about.” (Hadith)

4. They have their own societies and unique etiquettes of marriage, foods etc. with set boundaries to their abilities.

…Will you then take him (Satan) and his offspring as protectors and helpers rather than Me (Allah) while they are enemies to you? (Qur’an, 18:50)

“Do not clean yourselves with dung or with bones for they are food for your (believing) brothers amongst the Jinn.” (Hadith)

5. They can see us whereas we cannot see them (but some animals can).

“If you hear the barking of dogs or the braying of donkeys during the night, seek refuge in Allah from Satan, for they see what you do not see.” (Hadith)

6. Prophet Muhammad’s guidance applies to the world of Mankind and the Jinn.

Say (O Muhammad): “It has been revealed to me that a group of Jinn listened (to this Qur’an). They said: “Verily, we have heard a wonderful Recitation. It guides to the Right Path, and we have believed therein, and we shall never join (in worship) anything with our Lord (Allah). (Qur’an, 72:1-2)

7. Every human being is assigned a Jinn, they can flow through us as blood flows in veins.

“Verily, Satan flows in the bloodstream of Adam’s descendents.” (Hadith)

8. Jinn can possess human beings and excorsims expel them.

See you not that we have sent the devils against the disbelievers to push them to do evil. (Qur’an, 19:83)

9. Jinn have no power over pious believers except as Allah Wills.

And he (Satan) has no authority over them, except that We might test him who believes in the Hereafter from him who is in doubt about it… (Qur’an, 34:21)

10. Jinn are used by soothsayers and magicians even though they cannot forsee the future and lie excessively.

Who gives ear (to the devils and they pour what they may have heard from the Unseen from the Angels), and most of them are liars. (Qur’an, 27:223) 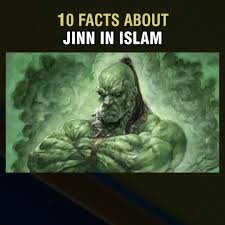