The Sun and all the planets around it are part of what is known as the Milky Way Galaxy. It is our home galaxy and one of the billions of galaxies in the universe. The term “milky” is derived from the galaxy’s appearance from Earth – a band of light in the night sky formed from stars. However, you can’t see that with your naked eye.

The Milky Way appears as a band as its disk-shaped structure is viewed from within. A barred spiral with a diameter ranging from 100, 000 to 1800,000 light years, our galactic home is estimated to contain between 100 and 400 billion stars. 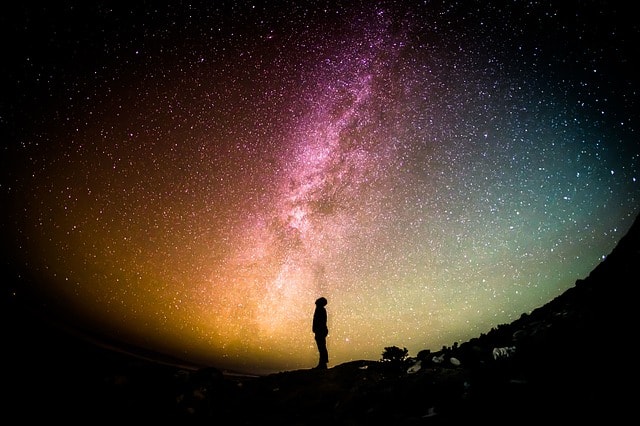 It’s a fascinating galaxy loaded with facts that will blow your mind away. That said, let’s look at interesting Milky Way galaxy facts.

Fact 1. The Milky Way was born about 12.5 billion years ago and has been growing ever since.

Fact 2. According to scientists, about 7 new stars are born in the galaxy every single year.

Fact 4. The distance of the solar system from the galactic center is about 30,000 light-years and about 20 light years from the plane of the galaxy.

Fact 5. The Milky Way travels through space at a speed of about 343 miles per second with regard to the Cosmic Microwave Background radiation.

Fact 6. The galaxy’s central core has a supermassive black hole, which contains the mass of roughly 4.3 million Suns. It is normally referred to as Sagittarius A.

Fact 7. The stars, dust, and gas of the Milky Way galaxy all orbit the center at a velocity of about 136 miles per second. This constant velocity for all stars at different distances from the core indicates the presence of a shell of dark matter surrounding the galaxy.

Fact 8. The Chinese call the Milky Way the Silver River. According to Chinese mythology, this Silver River was put by the gods to deter a herdsman who was in love with a weaver woman who used to weave clothes for them.

Fact 9. The Romans call it the Milky Road as it reminded them about milk.

Fact 10. In India, the galaxy has been referred to as Aakash Ganga. This literally means “Ganga of the heavens.”

Fact 11. The ancient Greeks referred to our galactic home as Milky Circle, which was created after some milk spilled over accidentally when Hera was feeding suckling Heracles.

Fact 12. The Ancient Greeks also looked upon the Milky Way as a road that led to Mount Olympus.

Fact 13. Another Greek mythology says that the galaxy is the trail of ruins that the chariot of Sun God Helios left behind.

Fact 14. Democritus, a Greek philosopher who lived circa 460 BCE – 370 BCE, is the first person in the world to claim that Milky Way was composed of stars.

Fact 15. Galileo Galilei would later confirm Democritus’ claim in the 17th Galileo eventually used his telescope to verify that the light band that has been given various names such as Milky Circle and Silver River was actually the light produced by numerous individual stars.

Fact 17. According to scientists, there are at least 100 billion planets hanging out there in our galactic home.

Fact 18. Andromeda, one of the other over 100 billion galaxies in the universe, is on a collision course with Milky Way. Traveling toward each other at 250,000 miles an hour, the two spiral galaxies will collide in about 5 billion years.

Fact 19. A supernova explosion takes place in the Milky Way about every 200 years based on calculations made using the method of mapping aluminum-26 isotope. Aluminum-26 isotope is normally found in an area where a star takes birth or dies.

Fact 20. There is an extremely thick bulge at the very center of the Milky Way. This bulge is caused by hydrogen and it extends out on either side of the spiral galaxy’s two-dimensional plane. The distance between the topmost and bottom-most point of the bulge is about 10,000 light years.

Fact 21. The galaxy is also surrounded by at least 150 ancient groups of stars. They live in the Milky Way’s halo and orbit the galactic center. Some of the ancient stellar clusters are among the oldest in the universe.

Fact 22. A recent observation using the Green Bank Telescope showed that at least 100 hydrogen gas clouds are fleeing the Milky Way’s core at about 738,000 miles per hour.

Fact 23. It would take a colossal amount of energy for a star to leave the Milky Way. Stars must attain speeds of 1 million miles per hour faster than the 600,000 miles per hour at which objects already move around the galaxy.

Fact 24. There are as many stars in the arms of the galaxy’s spiral as anywhere else. But the stars in the arms are bigger. They burn brighter and die out quicker. And they illuminate those around them, making the arms more visible.

Fact 25. The oldest star in our galactic home is at least 13.6 billion years. It was most probably formed soon after the Bing Bang.

Fact 26. If the solar system were the size of U.S. quarter, our galactic home would be about the size of the United States and the sun would be a minuscule speck of dust.

Fact 27. In light of the fact that the Milky Way rotates at a rate of 168 miles per second, the actual spot you were in space an hour ago is now about 600,000 miles away.

Fact 28. The galaxy has a halo of dark matter that makes at least 90% of its mass. That means all you can see, even with a telescope, is less than 10% of the Milky Way’s mass.

Fact 29. The center of the galaxy is full of mostly old stars while the spiral arms contain newer stars.

Fact 30. The center also boasts the highest concentration of stars as well as the most massive stars.

Fact 32. At a speed of 514,000 miles per hour, it takes about 250 million years for our solar system to complete one galactic year, which is one trip around the galaxy. At that speed, an object would circumnavigate Earth’s equator in about 3 minutes.

Fact 34. If the Milky Way’s diameter was the same as that of a Frisbee, the disk would be as thick as a sheet of paper.

Fact 36. Proxima Centauri is the Earth’s closest star in the Milky Way. It is at least four light-years away.

Fact 37. Since the dinosaurs became extinct, about 65 million years ago, the sun has traveled just about a third the way around the center of the Milky Way.

Fact 38. Besides rotation around the Milky Way’s center, the stars also oscillate, or move up and down, through the galaxy’s plane.